herby the dirty birdy and the terrorist

well, since it was the last day of our workshop and i was pretty fed up with fishes and plastic bottles i decided to stop messing around and get down to the manly stuff like explosive prohibited chemicals and bomb crafting.

i also dropped the water/fish designs because they didn’t deserve further attention due to their unwillingness to work. instead, i invented an “in-theory-airborne” bird design named “herby the dirty birdy” which i wanted propel with some real man`s hand cooked partly illegal rocket fuel like so:

so made a little sketcho of the bird i wanted to build and went to the construction market to get the most necessary parts and to think about how to get my handy on some Kno3 (Kaliumnitrate) chemicals which are illegal to handout to civilians without a license in austria (which OF COURSE i didn’t know). 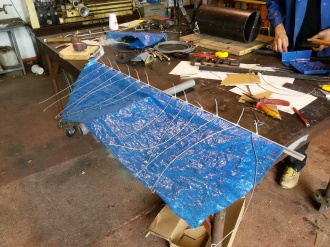 so i called about 5 different pharmacies all around linz until i was lucky to get an inexperienced pharmacy trainee on the phone (which OF COURSE i also didnt know) who was glad to help me out and ordered 200g of the precious chemicals for me. my luck ended though when i tried to pick the stuff up there personally and ran into the very well experienced head of the pharmacy who turned out to be very uncooperative in terms of handing out illegal chemicals to people who had no license. but she made a mistake..

in the beginning of our discussion she said that “in her interpretation” she wasnt allowed to hand out the substances to me, which i turned into the argument that i dont order something and drive around the whole city with my bike in order to not get something because of someones “interpretation” and that she has to be sure and has to show me the proof of her “being sure” in order for me to leave and stop annoy her to death shortly before she was about to be on her way home on a sunny friday afternoon. well, after fighting to read through a bunch of law texts on her computer which were not very precise in terms of arguments and agreeing on writing down my identity and report it to some officials we agreed that i could take the substances home in exchange for officially being flagged as a terrorist in some states computer files (no im not paranoid at all).

so i cooked the stuff following safety procedures as tightly as i could and stuck it to the butt of the dirty birdy in order to defy the laws of state and physics hoping that it would at least end up in a firery explosion rahter than maybe also move up in the air or do something birdlike.

finally all my efforts and hopes where crushed in a glorious display of shame and pity as herby the dirty birdy burned down and died horribly in fire and smoke while in the water at the final demonstration.

so i would say the workshop was quite a success!
would do again :).

ahoi and thanks for all the fish. it was a great time!

This entry was posted in Uncategorized. Bookmark the permalink.