Long story cut short , it is essentially a drawing machine.
It’s purpose is to produce (sellable! – this is important!)abstract paintings, that will maintain my artist career while I’m somewhere in a middle of nowhere or something of that sort.

This is the design of the machine
We talk over it with Tim last afternoon and some details are to be changed. I will add updated documentation here asap. 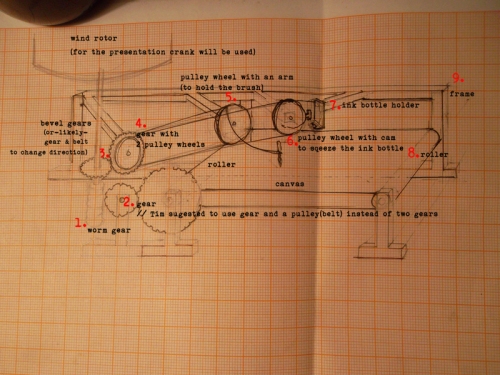 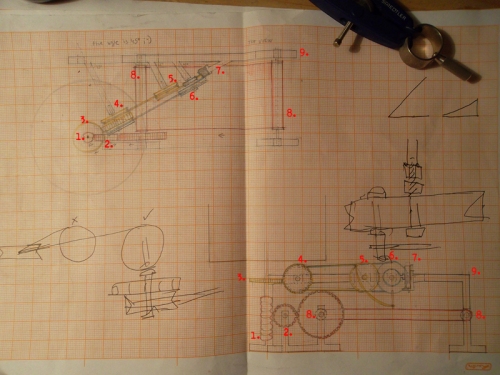 1st step
– to draw the shape of the gear that needs to mesh with the worm gear.
– to make the gear(2) out of wood(probably).
– to decide what’s next 😉
In general:
– make the pulleys, gears & the cam from whatever materials.
– build the rollers
– buid (weld) the frame that holds it all in place.
– get a canvas
– assembly it all together
– try – change – try – —
Once working:
– hire a selling agent
– go travelling!!!! 😉

The worm gear from a meat grinder.

Visual documentation failed. Up in the hills without camera and with not working scanner. My “Lomophone”just wouldn’t do this ;-)More tomorrow.

To summarise in words:
– I cut a gear out of wood. OK measured, cut & tested and to my own surprise, it seems to be working together with the worm!(Atleast as far as my very precise testig method can prove.)
– I made a detail plan for the frame that shall hold all the mechanism in place and working together. Moral: making detail plans makes you do discover problems you had not the slightest idea about previously.
Summary of the day in numbers:
In 1/3 of given time I made about the 1/50 of given work. Must make this equation bit more in balance tomorrow or I’m in trouble!

or Maruska’s adventures harness of the electric energy 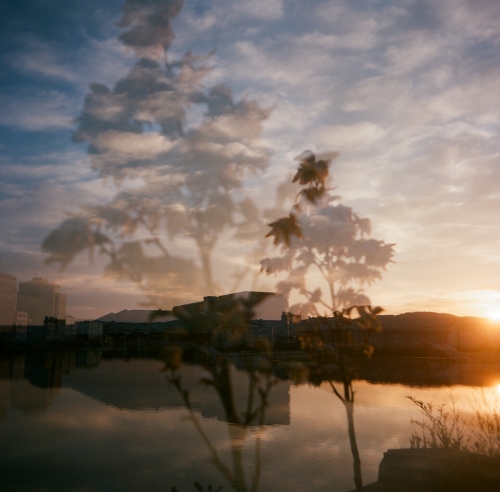 Very poetic picture of Times Up port (no, this is not Photoshop, real, good old analog double axposure 😉

Confession first: Prior Robotics workshop at Times Up I never cut a piece of metal in my entire life. Never drill a hole into it either. Not even dared to think about welding.
And I’m from a family where it was believed(and practised)that anything can be fixed with a help of packaging rope and “kobercova paska” (a communist equivalent of Gafo tape). Why do you need workshop tools when you have these essentials around? Oh, and not to forget to mention(and further illustrate my profound ground for building an electricity generating wind turbine), my father managed to generate pretty epic ball lighting. Well, only once. And it was rather unrequired effect of his attempt to fix something in the main power switch of 8stories apartment building.
Well….Hope this confession explains my lack of skills and the slow phase at which I proceed with my Savonius turbine project. 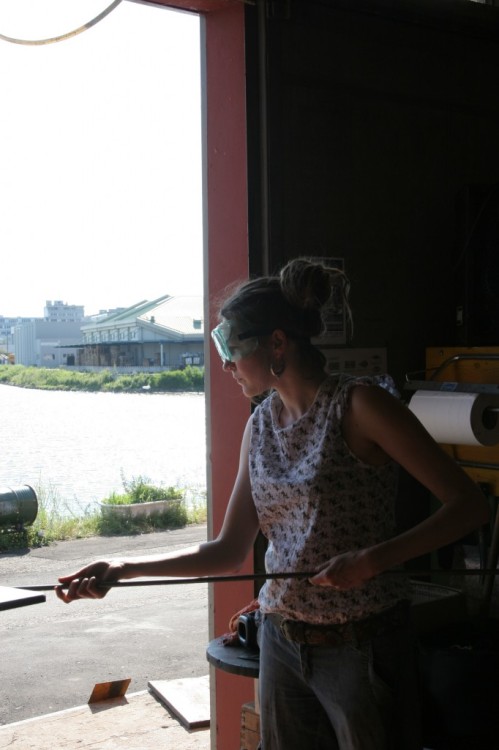 I managed to cut a steel barrel in half. Approximately straight as using a grinder is slightly intimidating. They are hot sparks flying from it, it moves in a strange way and it’s noisy, you know.
Then I measure and cut various amount of steel pipes from which the frame holding this barrel(well it will not be a barrel anymore it will be Savonius rotor to be exact) shall be constructed.
I welded the frame.
Then it was Saturday 5pm and we had to leave the Times Up base as Tim was travelling away. So I spend part of the evening in the garden watching fireflies. Important activity, even it might not seems so at first, as it made me realise that I had forgotten.. .well.. a “detail” (Please allow me to sooth my frustration by calling it this way!) – the purpose of this frame shall be to hold the rotor, therefore the rotor(once it’s build) has to be attached to the frame. ATTACHED to the frame. Yes. I have this drawn in my drafts but forgotten to make it in steel. (see Fig 1. for further explanation). So I have nice solid smooth frame and the rotor somehow separated….hmmm.. 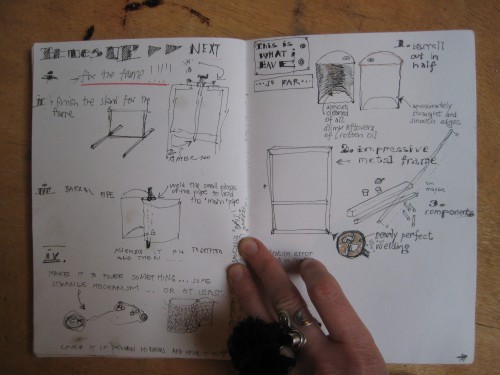 Fig.1 Pictures separated components, that shall be assembled together into Savonius rotor attached to the frame and proposal for the next steps. (Right to left.)

Markus had proposed an easier solution, that excluded the need to cut already build frame, which I was previously considering. He had also given me lot of tips that significantly improved my welding technique…(Oh ..there is nothing like gaining the secrets from the master!)See Fig.2.I. that illustrates the solution.
It’s midnight..air motionless..rotor is build, attached to the frame that stands. And the only way to test it is to use the industrial punk ventilator from Times Up’s collections.
And it works, yes it does! How nicely my rotor moves ..I can just drift into next peaceful 15 hours of sleep.

And now the power.
Due to the time constrains I had completely given up the original idea of creating a permanent magnet generator or converting a P.M.servo motor into one. Good old Cold War era bicycle dynamo is assigned the job – the job to, power by the wind energy solely,generate enough power to bright up a light! Well..LED of bicycle lamp to be exact.
The construction is explained by Fig.2. II. 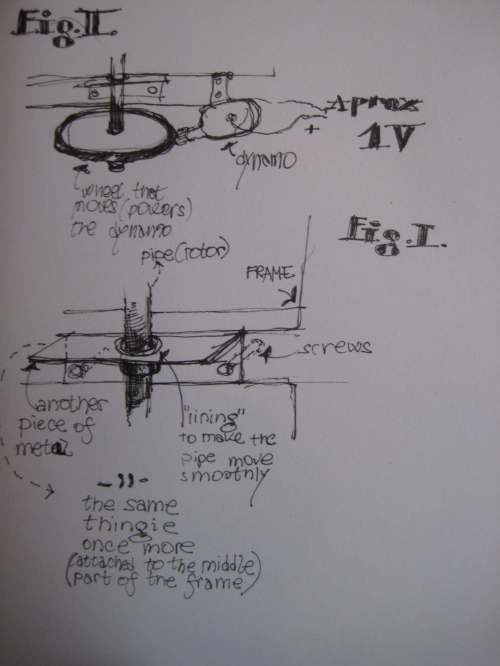 Fig.2.
I.That illustrates the solution how the rotor can be attached to the frame as proposed by Markus.
II. That pictures the way how the dynamo and the powering wheel is attached.

Wheel attached. Dynamo attached.
And then…
…the thrilling moment of grabbing a multimeter and finding our how much electricity my dear rotor is actually able to generate. 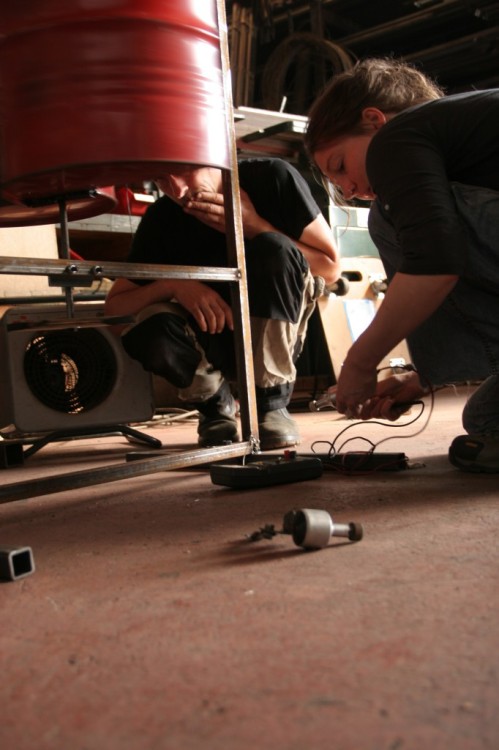 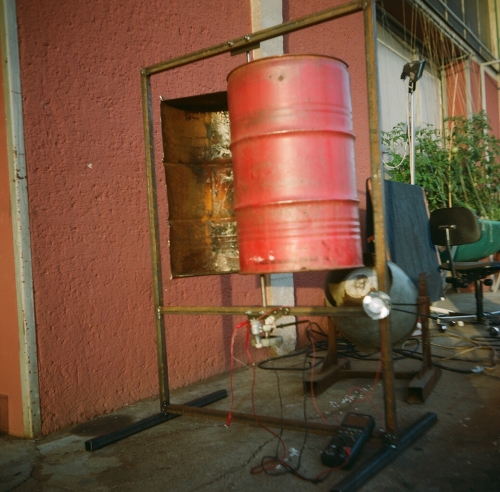 Ideas and suggestions for the future life of the rotor – please share yours! 😉
– disco rotor (me)
– mechanical musical instrument (me)
– praying mill (Tere)
– coffee grinder (Andrej)

(Sorry for the style..writing in hurry)

(or is that the same thing 😉

Design of the turbine

Some instructions
Hope to find an old barrel I could use at times up as well as to build on experiences that you already have with building the compost airing system!

..well that’s where it get’s less clear to me….

Few tutorials and instructions I discovered :
From the men who seem to be the guru of wind power generation : Hugh Piggot
website —->

PDF’s :
Nice introduction onto wind power generating projects (in “developing world”, which fits exactly because I have my friends from Papua New Guinea on my mind with this project!It also explains in detail how to make things and at low cost and in(ehm..relatively)simple way
http://www.scoraigwind.com/download/Bookletwind.pdf

Would that be possible to combine his PMG design with Savonius turbine design?

Other VERY detailed website about building a wind generator
…makes me think that converting an existing motor (permanent magnet servo) in this case is more work that making the generator from scratch as in previous tutorials. But he explains things really..I mean REALLY in detail.
http://wind.morrisonprairie.com/WindMachine.html

Other design: Mini floppy wind generator
Recomanded by friend Marios who actually follow the instructions and succeed;-)
http://solar.freeonplate.com/floppy_windmill.htm
http://www.instructables.com/id/How-to-build-floppy-drive-wind-generator/
..But maybe this is too small for this workshop ???…and it doesn’t involve welding…
He uses servo motor from old computer.